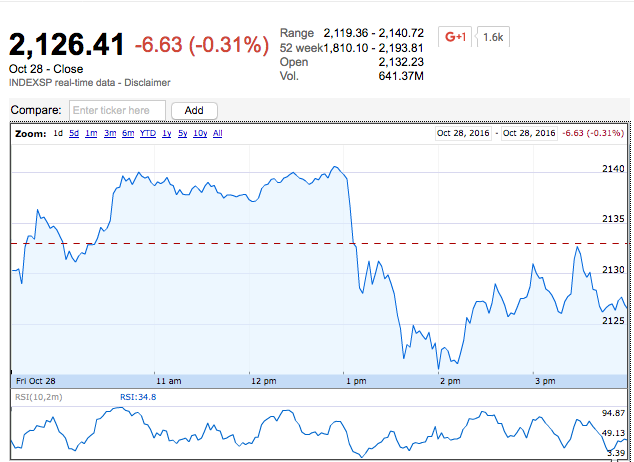 It’s been well over a year since anything’s been published on this blog. Good to be back!

Justin Wolfers, professor of economics at the University of Michigan, has recently argued that the stock markets react negatively to the possibility of Trump being elected President. And indeed, when the FBI announced today that they were looking into some of Hillary Clinton’s email messages again, stocks fell and volatility measures increased.

It’s worth remembering what the S&P 500 index is to see what the market is actually expecting from Trump:

What would Trump supporters argue here? They could argue that the market is wrong about its expectations, and that it would initially fall but eventually rise if Trump is elected. In that case, they should bet accordingly by buying in the short-term period after Trump is elected (if he is elected). They could do the opposite if he isn’t elected (namely, once the market rises in the short run, start betting against it).

Or they could argue that the market expects nominal GDP to rise relative to trend but S&P 500 earnings as a a percentage of GDP (we’ll call this E/Y) to fall relative to trend. If there were no change in the divisor or in the P/E ratio, then E/Y would have to fall far enough that E would actually fall (relative to what the market would otherwise expect). What would the reasoning here be? They could argue that S&P 500 companies would lose business, but that smaller firms and/or workers would benefit by a greater amount. Perhaps if Trump encouraged better antitrust enforcement, this could happen. It could also happen if he reduced immigration to the point where labor share of GDP increased, but this would probably reduce nominal GDP, so it would become harder for them to argue that nominal GDP would rise relative to trend. (Also, in most models, immigration doesn’t affect labor’s share of GDP in the long run because the capital-to-labor ratio can readjust.)

They could also argue that Trump being elected would reduce the price-to-earnings ratio (we’ll call it P/E). Trump’s proposed tax cuts might be expected to raise P/E by increasing people’s willingness to invest at current stock prices. But if he is expected to run large deficits, the market might expect the deficits to raise interest rates and crowd out private investment, which would presumably lower P/E. Trump could also create policy uncertainty that would discourage investors and reduce P/E, although this doesn’t seem like an argument that Trump supporters would want to use.

They could argue that Trump would somehow increase the divisor I mentioned earlier. Perhaps more S&P firms will issue new shares and dilute their existing ones, although this doesn’t always actually reduce the share prices (since the firms now have more cash). A potential pathway here is that Trump could cut corporate income taxes, making equity financing more favorable compared to debt financing and thereby encouraging companies to sell shares and pay off debt. (Here is one paper arguing that the current tax system encourages debt financing). However, this could also end up raising the P/E ratio, since investors are willing to pay some amount for an increased book value for the firm. So it’s not clear how Trump’s expected policy proposals would affect anything here.

Lastly: Trump supporters could just admit that Trump would reduce expected nominal GDP compared to what it would be under Clinton. This doesn’t destroy their argument for him. They could still claim that Trump would increase American life satisfaction. Or they could argue that electing him would help foreigners. Or they could argue that Trump would raise real GDP compared to trend but reduce nominal GDP compared to trend, although they would have to then admit that this would make managing the federal debt more difficult. This also seems unlikely, because then market expectations of inflation would fall, but they actually just rose slightly (from a 10-year TIPS breakeven rate of 1.71% yesterday to 1.72% today). So Trump supporters who argue this position would have to say that the market expectations are wrong.

Which will it be? 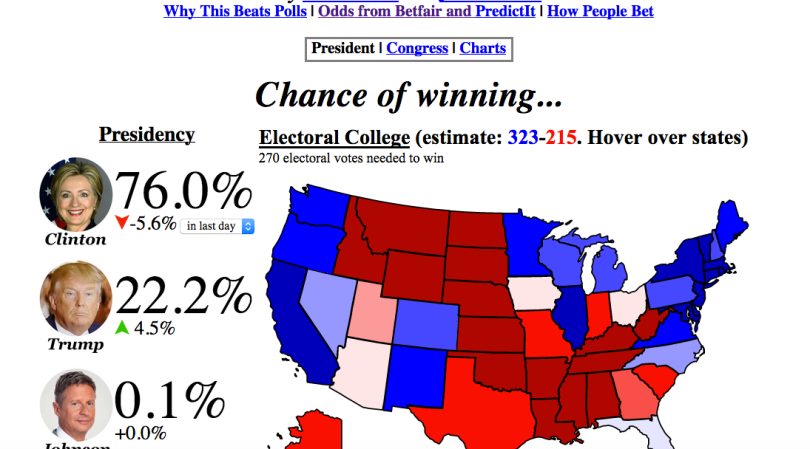 Professor Wolfers had found an increase of 0.71% in the S&P associated with a 6-point gain for Clinton. So with that ratio, we would expect a 0.66% fall in the S&P 500, which is exactly what we saw.

SECOND EDIT: My co-blogger tells me that it’s worth mentioning arguments against this hypothesis. Prof. Tyler Cowen has a post citing evidence that Trump’s odds aren’t significantly correlated with stock returns.

My view is that betting markets, including conditional ones that can provide information on how markets expect one event to affect the likelihood of another, should be liberalized (and can even provide policymakers with valuable information). I still think that with available data, Trump supporters must face the choice I described in this post.

One thought on “What the market expects from Trump”